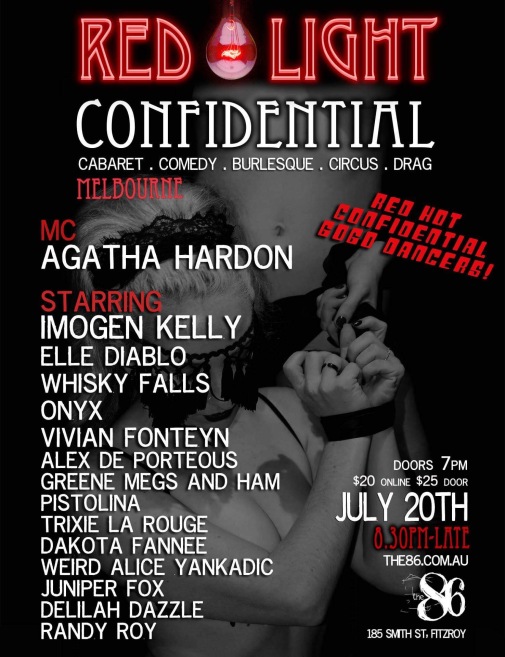 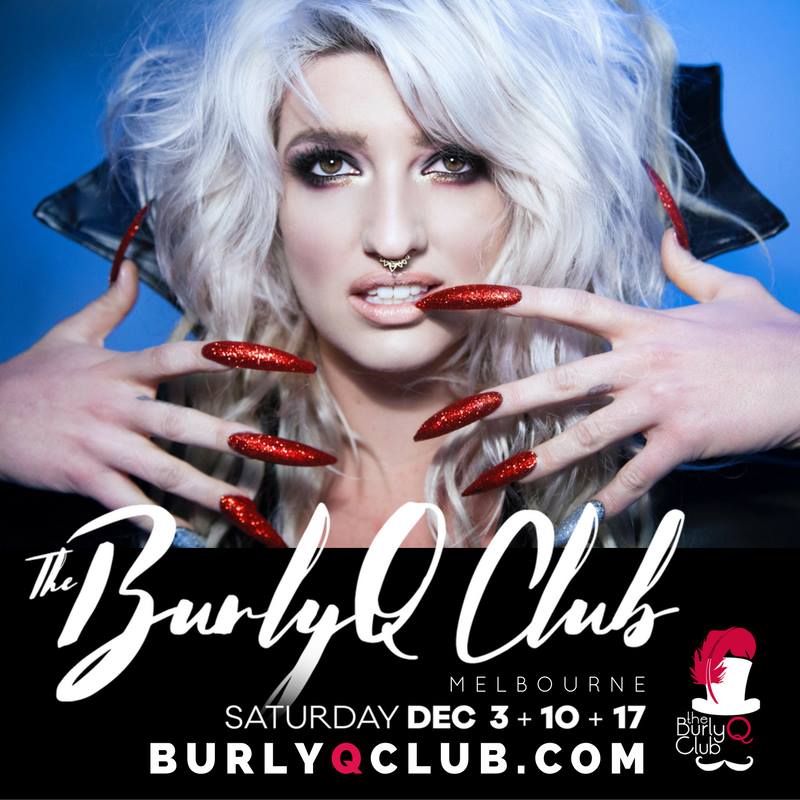 ESCAPE TO AN ALTERNATE REALITY AT
“AUSTRALIA’S BEST NEW DINNER & VARIETY SHOW”
I’m very excited to announce I’m featured as part of the all-star line up for the Burly Q Club’s premier season on the 3rd and 17th of December. Get your tickets here as they will sell out!

It’s getting a bit too cold here so I’m heading somewhere just a little bit warmer. My dates for the UK summer are:

13th-16th August Boomtown with The Syndicate

I have been performing in several shows this Perth Fringe season and I’m having an excellent time! Here’s some of the reviews:

‘The night ended in style with a mash up of aerial and fire work from Elle Diablo. With a killer song, a creepy mask and a sinister political message it was a badass finale fitting for a showcase that celebrated the weird and wonderful world of Fringe.’ -The Perth Project Feb 11

‘Last up was Victorian-based performer, Elle Diablo, in a rollerskating, fire-eating disco inferno. I loved this act, although it was quite short, and would really enjoy seeing more from this gal. She’ll be performing in a few more Fringe shows, so check her out when you get the chance.’ -Jay’s Completely Unsolicited Reviews, Feb 13 2016

‘Next up was a run of burlesque from Perth-darling Vivian Marlowe, former West Aussie now based in Canada Agatha Frisky and Victorian superbabe Elle Diablo. Each act brought something to the table to kick things up a notch – Vivian Marlowe had a gorgeously surreal costume and ended her hip-shaking number covered in a gloriously glittery number, while Agatha Frisky teamed up with her husband (the Great Gadso) to deliver a deliciously kinky performance and Elle Diablo finished with a bang by swallowing a sword.’ – The Perth Project, 15th of Feb 2016
El Bizarro is running until the 21st of Feb with tickets still available at http://www.fringeworld.com. The show is then heading to Adelaide Fringe 22nd-28th Feb 2016!

On Halloween Ember and I debuted our brand new fire act at Pandemonium at the Thornbury Theatre feating several of our new props. Video to come.

Things have finally calmed down after Chest of Wonders season at the Circus Oz Spiegaltent for Melbourne Fringe Festival. Thank you so much to our wonderful cast who again were so amazing. Chest of Wonders is going to have some down time over the next 12 months so that everyone can concentrate on their solo projects. Here’s a couple of audience snaps from the show and a little preview video made by the incomparable Chris Bennett.

A huge thank you to Lucha Libre Australia and Humblot Watches for involving me in this massive project! What an excellent show with even better people. Here’s a little video I have a two second cameo in. Singapore, you were phenomenal!